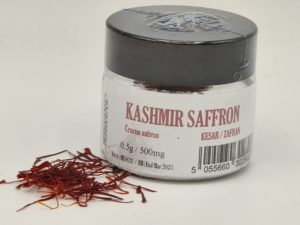 My Personal experience with Saffron. I have been lucky enough to have lived in Kashmir in early years of my Life. Even though I was born in New Delhi, where I now have my office & establishment. My Father was transferred to Kashmir & so did we shift to the completely new Place called “KHREW”. I studied there for few years. This is the place where Saffron (Otherwise called “Zafran” – Under Persian or Arabic influence) grows.

We always had known it as “Kesar”.

The 13 Km radius spreading from Khrew to Pampore is the only place in Kashmir, where saffron grows. It doesn’t grow any where else in whole of India or that part of the world. Even people tried growing the saffron in the 14th Kilo meter or out of that area, but it never grew. Not even in the Pots witht he soil from that place.

Saffron is said have been originated from Persian countries especially Iran, & was probably brought into India from Iran. In today’s world the best Saffron comes from Kashmir (India). And that too just from that 13 Km radius.

Now I think I was blessed to have lived & studies in place called Khrew (13 Kilometers from Pampore (the Hub of Saffron in Kashmir). I studied there for over 4 years. In winter,(when crop comes out in November) we used to pluck the flowers from our front garden. (which was only very few).

Me & my brother as kids used to go to the saffron farms & pick the flowers & bring them home, remove the stigmas & used to dry the stigmas under the heat of bulb in the room. We would pile up a table & put chair on the top of table & put the wooden stool on the top & then keep some books so that the paper that had saffron on it would get very near to the Light bulb (of 60 watts). With the Heat of the bulb the saffron dried. Once dried we would keep it in a container. If you don’t dry the saffron immediately, it would get ruined.

I now import the 100% Pure & Natural Saffron from that part of the world. It comes in bulk & we re-pack it in smaller containers here in London UK.

I know the difference between the saffron from Kashmir & saffron from anywhere else in the world. As I grew saffron in my front yard & in the small pots.

The main characteristics of the Saffron from Kashmir are:-

Little bit of History of Saffron : – Saffron is known to have originated from Persia & then it travelled to East to Kashmir & then to Europe. It used to grow in France & Italy.

Saffron also grows in Greece, Turkey, Spain, Afghanistan, Morrocco, China, but is known for its cheap quality, and has a pale colour.

Earlier I always thought Saffron only grows in Cold weather, but now I found out that it also grows in warm countries.

Many Centuries ago It used to grow in London & other parts of the UK. (such as Walden – In Essex)  There is also a spot in the central part of London named as “Saffron Hill”, named after the name of the saffron that once used to grow here.

In Recent times they have started growing Saffron again in Britain. It is known as British Saffron growing in the UK in Walden farms (Essex), Saffron grows in Wales, in Isle of Wight & even in Ireland.